Here is a short statement of what CST is:

The Roman Catholic Church’s ‘Social Teaching’ is what the Church has to say and, together with all people of good will to put into practice, in relation to the big issues that we face in living together in human societies. Among the issues that Catholic Social Teaching addresses are: work and rest, business, family life, poverty, environmental degradation, political participation, what governments should do, and peace and war.

An inadequate understanding of the Christian gospel, which saw it as about offering an escape from this world to a spiritual ‘heaven’, might lead people to think that the Church need not have any ‘social teaching’. On such a view, all the Church would need to do is make sure people hear about the offer of escape from their present misery.

But as far back as the second century after Christ, the Church rejected that kind of understanding. In that early period of the Church’s history, there were many religious movements which had that sort of escapist view of a purely spiritual salvation. Modern scholars refer to such views as ‘Gnostic’. In the second century, the Church clearly rejected Gnosticism.

This was for two main reasons. First, the material creation was made by the one God, and, according to Genesis chapter 1, it was made very good. Second, God’s love for the world was so great that God had gone as far as to come into this material world, in his Son Jesus Christ, demonstrating that the material world itself is immeasurably important to God.

These two reasons are basic in why there is Catholic Social Teaching. God is deeply concerned with how things go in his good creation. God has not abandoned it and does not offer people mere escape from it. Ever since that early period, the Church has offered teaching on how things should be done in human societies here and now.

Some of the greatest thinkers and theologians in the Church’s history have addressed such questions. The two most influential such figures are:

• St Augustine of Hippo, who lived around the year 400 and who wrote two especially influential books (among several others), Confessions and City of God

• St Thomas Aquinas, who lived in the thirteenth century and set out an astonishingly comprehensive vision of Christian teaching on almost all possible topics.

Both of these will be referred to from time to time in the two Virtual Plater modules.

But what is now generally meant by Catholic Social Teaching has emerged more recently – in the past 120 years. In 1891, the then Pope, Leo XIII, issued an encyclical (a major teaching document) called Rerum Novarum. This is seen as the first of a series of publications which together form modern CST.

Rerum Novarum addressed the first of the issues mentioned in the short statement defining CST at the top of this page: working life. He did so because of the appalling conditions which large numbers of industrial workers in Europe were enduring following the Industrial Revolution. In Unit 2 we shall look at the historical background to the publication of Rerum Novarum, and both there and in Unit 4 we shall give attention to what it said.

All papal encyclicals are named by their opening words in Latin. So ‘Rerum novarum’ are that encyclical’s first words. They mean ‘new things’.

Most of the documents that are widely seen as forming the global Church’s official Social Teaching are papal encyclicals, although some are of other kinds. A few issued by Popes are ‘apostolic exhortations’, but how these are different from encyclicals doesn’t matter for study of this module. Others include a statement by a Synod of Bishops in 1971, and some of the Pope’s annual ‘messages for the World Day of Peace’. There is also the recent Compendium of the Social Doctrine of the Church, on which I comment below.

So far in this unit, you have already read a short newspaper article summarizing the content of Catholic Social Teaching, namely Christian Allen’s article (1.1.1). You have also seen a brief definition of several main principles of CST (1.1.6). Taking another step in introducing CST, below is a box listing its main documents.

1931. Pius XI. Quadragesimo Anno / ‘The Reconstruction of the Social Order’

1967. Paul VI. Populorum Progressio / ‘On the Development of Peoples’

2004. Pontifical Council of Justice and Peace. Compendium of Social Doctrine

2010. Benedict XVI. ‘If You Want to Cultivate Peace, Protect Creation’*

* Messages for World Day of Peace

Note that several documents marked anniversaries of earlier ones: 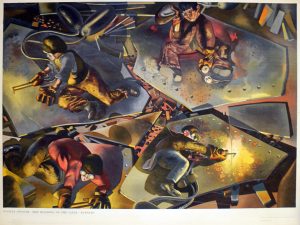 Spencer was born in 1891, the year of Rerum Novarum, and part of this painting was used as the cover of the 1991 English edition of Centesimus Annus.

The painting can be seen at: http://www.rennart.co.uk/spencer.html.

To return to the metaphor I used at the very beginning of the unit, anyone would need something like sat nav to find their way through that set of documents!  Encyclicals are typically 40-50 pages long and are quite densely written.  Many of them were composed with certain events and issues in view that were current at the time, but in most cases little or no direct reference is made to these.

The documents listed are the main ‘primary texts’ of the Roman Catholic Church’s official Social Teaching.  Throughout this module, extracts from these primary texts will be set as readings.  Very often I will give an introduction to such readings on screen, the aim of which is to enable easier understanding.

One of the documents listed goes some way towards giving very useful navigation through the rest of them. In 2004, the Pontifical Council for Justice and Peace in Rome issued a 300-page Compendium of the Social Doctrine of the Church.  This is a very useful publication in that it brings together much from all the earlier CST documents in a convenient précis.

Nevertheless, commentators have pointed to some drawbacks with the Compendium.  While it is clearly organised into chapters on different topics, these vary in their digestibility.  Some do make the material in other documents easier to access and to understand, such as the excellent chapter on ‘Economic Life’.  One or two chapters, however, are heavy going because, it is clear enough, they were written by a committee!  (An example is that on ‘Safeguarding the Environment’.)

Later in the module, I will comment on another kind of document: statements issued by national Bishops’ conferences, such as the Catholic Bishops’ Conference of England and Wales (CBCEW).  We shall look at various statements of this kind during the module.

We shall also give attention to a wider category of publications which can be given the heading ‘Christian social thought’.  This comprises books and articles, from all periods of the Church’s history, written by scholars or commentators or Church leaders.  Such contributions to Christian social thought address the same sorts of issue as ‘official’ Catholic Social Teaching, and they represent the voices of particular Church members and leaders, rather than that of the institutional teaching office of the Catholic Church.

Sometimes contributions in the field of Christian social thought have influenced the development of official teaching.  Often such publications comment on this teaching, offering interpretations and critical assessment of it, which in turn can provoke its development.  Indeed one of the most interesting things about both Christian social thought and the Catholic Church’s official Social Teaching is that they are still developing.

All the documents listed above are on-line at the Vatican’s website, www.vatican.va.1 Many of the links given for readings in this module will take you to documents accessible there.

But it must be said that not all the texts at www.vatican.va are presented in a very user-friendly manner.  Most have a dappled beige background that somehow makes the documents seem even denser and more forbidding than they are!  Most are available simply as very long texts without so much as a contents page. However at a different site, www.intratext.com, some are accessible chapter by chapter (or section by section) and in a clearer format. (They also have a concordance that can be a useful study tool.) See, for example, Pope John Paul II’s Centesimus Annus.

Regardless of how they appear on the internet, you can always download the text of CST documents yourself by cutting and pasting, and can then give them a font that you find easy to read.

Many of the main documents are also accessible at some other websites, including:

Both these sources are very useful, but you need to be aware that occasionally the numbering of sections in the documents differs from what is found in the official texts on the Vatican website.

Note two things about references to Church documents as they will be given throughout the module:

Copyright © Newman University.  If you wish to quote from this page, see: Citation Information. N.B. If you make use of material on this page in a course assignment, you are obliged to reference the source in line with the citation information.